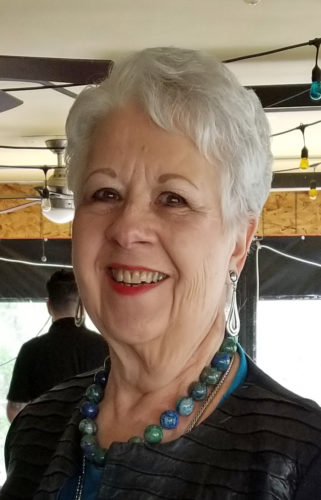 In February, 1976, I was diagnosed with Grade III to IV adenocarcinoma (BREAST CANCER)!  I was 41 years old, divorced, living alone.  I had no siblings, never had children.  Until that time my health history, according to the medical records, was “unremarkable”.

I had noticed some tenderness in my right breast followed a few weeks later by what appeared to be a strange looking bruise, brownish and somewhat inverted.  I called my long time doctor who saw me that morning.  As soon as I saw the expression on his face, I realized something was very wrong.  He referred me immediately to a surgeon, who performed a needle biopsy, the result of which indicated a more invasive biopsy was necessary.  I was admitted to All Saints Hospital where this (lumpectomy) was performed.  Those lab results indicated the necessity for a right radical mastectomy which was carried out.  During the mastectomy 22 lymph nodes were removed, 5 of which were positive.

After a period of recovery I was referred to an oncologist who discussed with my mother and me treatment options.  My prognosis from the oncologist was not encouraging, approximately 2 years of life.  However, he recommended a bone marrow aspiration biopsy as well as a liver biopsy.  Following these procedures and somewhat against the oncologist’s recommendations I elected to go to M. D. Anderson for further evaluation.

Thankfully that choice proved to be a good one for me.  After many more scans, biopsies, etc. as well as a plan of chemotherapy treatments, I was asked if I would be agreeable to participating in a new and as yet unproven treatment, cancer immunotherapy.  I felt I had nothing to lose and said “yes”.

The doctors at M. D. Anderson then outlined a schedule of chemotherapy, (Adriamycin, Cytoxan and 5 FU) together with immunotherapy (BCG).  After 9 courses of Adriamycin I was switched to Methatrixate, Cytoxyn and 5FU.  Both the chemotherapy and the immunotherapy were administered here.  I continued to make scheduled visits to M.D.A for the next 2 years.  For the next 30 years I received annual letters from M. D. A. inquiring about my health.  I haven’t heard from them in some time now.  Today I’m grateful to say my health is good.

I participate in Komen’s More Than Pink Walk because I believe Komen is actively involved in RESEARCH FOR THE CURE.  While I am not a fund raiser, this is one way in which I can help “get the word out”.

Am I more than pink?  I’m not sure about that but I believe it is important to demonstrate that no longer is breast cancer a death sentence.  Thanks to the Susan G. Komen contributions to cancer research, more and more discoveries are made that eventually will cure breast cancer forever!