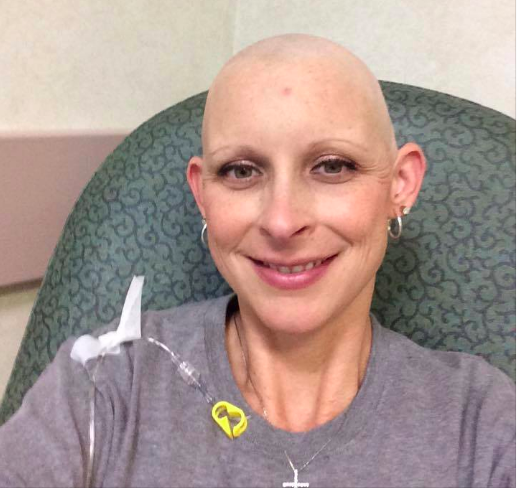 “I would have to say that my breast cancer journey is a little different than most. Mine began when my sister was diagnosed with breast cancer at the age of 26. After genetic testing, we found out that my sister, mom and I were all BRCA 1 positive. I was only 23 but the news was terrifying. I started having annual mammograms, but after being unable to breast feed my first baby, I made the decision to have a prophylactic double mastectomy at 28. After I was done having my children, I also had a preventative complete hysterectomy in 2014, at the age of 34. I felt like I had done everything in my power to prevent myself from getting a breast cancer diagnosis. Fast forward to October 2015. I felt a weird twinge in my right breast one evening after getting in bed. I felt around and found a pea size lump. I was scared, but thought after all the surgeries I had undergone that there was no way it was anything. I was scared enough to have it checked though…”

“After 2 mammograms and an ultrasound, I was told they couldn’t get a clear picture of what was going on and a biopsy was ordered. I waited days after the biopsy to receive a phone call, but it was too much so I called in for my results. “It’s positive for breast cancer” is what I was told. I was at work when I got the news which is probably the best thing because the people I work with are the strongest, most loving people. As my world was collapsing they were there to build me up…”

“I began doctor’s visits with the oncologist, the surgical oncologist, and then the plastic surgeon. I truly believe that God gave me the opportunity to be surrounded by the best and I owe those 3 women my life.

A plan was made, I would have a “completion-mastectomy” with immediate reconstruction on December 1, 2015. From there I began 8 rounds of chemotherapy, including the “Red Devil” Adriamycin and Cytoxan for 4 rounds and then Taxol for the next 4…”

“I began to lose my hair the day after my 2nd treatment. I was at work and ran my fingers through my hair and it came out in clumps. That night my husband shaved my head for me and my 2 oldest boys shaved their heads too! I didn’t wear a wig, too hot and just didn’t feel like me.

I am a counselor at a high school, I rocked a bald head and my students seemed to get used to it quickly. I tried to keep my life as normal as possible, only missing work on my treatment days and then 1 or 2 days afterward. I attended all the events my children were in and even ran in the Cowtown 5k with my 6-year-old son because he didn’t fully understand how weak I truly was…”

“I learned very quickly how people can come together in support. My neighborhood and friends provided my family meals 3 times a week for 4 months. My family members took me to chemotherapy, doctor’s appointments, and helped with my 3 boys. Fellow survivors that I didn’t even know reached out to me to help me through this journey.

The diagnosis was devastating, the treatment debilitating at times, but the support I received was beyond what I could have ever imagined.

I have joined a club I never ever wanted to be part of, but it’s a club of the strongest women I know!”