“God woke me up that night” 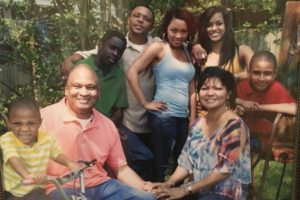 Janet was only 38 years old when she got the terrible news, but the pain she felt that alerted her to the problem was worse.

In August 1999, she was lying in bed only to be awakened by excruciating pain, she explained.  “I had always checked myself and done my breast self-exams because I had fibrocystic breast”, Janet said, prior aspiration and mammograms had all come back negative but this time she knew it was different.  The cyst found only a month earlier had now returned with a vengeance.  It had filled with fluid, was large enough to be seen protruding through her skin and was so painful that she could no longer sleep or ignore it.  Janet did what any other concerned breast owner would do, called her doctor.

“I immediately called my doctor when I got up and he told me to be in his office first thing that morning”, a request that Janet now credits to saving her life.  During that doctor’s visit her physician referred her to a surgeon who recognized the urgency of her situation and drained the breast of what Janet described as “green yuck”.  That green yuck would later be the first indication to her doctors that she had breast cancer.  “He said don’t worry about anything, it’s fine” she said, but he later admitted to her that he and the surgeon both knew that she had breast cancer before they even got the test results back.  “During a later visit to my surgeon, he told me that I should send a large bouquet of flowers to my doctor”, as she giggles with admiration.  She went on to explain that it was due to him being so proactive and sending her to that surgeon right away that potentially saved her life.

“After the visit with my surgeon, I went in for a biopsy which came back positive for breast cancer and did a confirmation biopsy which confirmed the earlier diagnosis”…wanting to do everything in her power to save her life she decided to do a mastectomy in November 1999.  Janet didn’t realize that this was just the beginning of her journey…a journey that would start on the road of fear and end on the trail of hope.

Fear is always scary, it’s debilitating, especially when you’re a survivor of breast cancer and to survive sometimes you have to make difficult decisions.  “I couldn’t even function”, Janet exclaimed, so in March 2000, after living in constant fear of a reoccurrence Janet made the difficult decision to remove her other breast.  “I never thought about it before now, but I guess you’re right I removed both my breast in one year’s time – a double mastectomy was never in my plans!”

“Surviving breast cancer has changed my life!” she said, “It has changed it for the better!”  Hearing the excitement in her voice, Janet went on to explain that her survival has made her more focused and has positively impacted her faith.  “I love God with all my soul, with all my being because I know he woke me up that night”, she said with reverence.

She continued by saying, “I had always heard that when you have cancer it doesn’t hurt you like that, I still to this day don’t know if it’s true or not but for it to hurt that bad in the middle of the night I know in my heart that it was a wakeup call from God.  He sent it to me like that so that I can realize just how urgent it was.” As if he was saying, “This thing is growing in your body and you need to do something about it”

While Janet was doing something about the breast cancer that was growing inside her, God was fixing everything else…after all the trials and tribulations of battling breast cancer, then a divorce she later went on to meet her husband who’s an elder in a local church.  She gleefully explained that, “with my three children, his three children and two grandchildren we make one amazing family and I’m happy as ever”.  Family has always been important to Janet and knowing that her sister, Lynn is now battling breast cancer makes her faith even stronger.  When asked about her experience with breast cancer, she meekly replied   “Hopefully my experience can help someone like it’s helped my sister because right now she’s battling  breast cancer and is doing radiation”, I’m grateful that I’ve experience it so I can help her”.   “I want to always help other people, it gives me joy, “I love it!” she exclaimed.

Janet’s love of helping people is apparent because even having a full-time career, she still manages to volunteer with Susan G. Komen Greater Fort Worth, something she doesn’t take lightly.  “Being a volunteer with Susan G. Komen has played such a big part in me being able to come to terms with having breast cancer and being a survivor, just seeing all the women and men who have been affected by breast cancer, co-survivors, family members and friends just come together it helps me realize that I’m not the only one.”

When asked what message she had for others she simply said, “Even if you don’t have any history of breast cancer in your family it doesn’t matter, go to your doctor, do your breast self-exams and if your doctor says do a mammogram, just do it…be proactive, especially if you have fibrocystic disease.”  And although she realizes that sometimes religion can be a touchy subject she still wanted to remind others to…“Always put God first in your life, make sure you’re praying and helping others, be kind to others because you never know what they’re going through and that’s the biggest thing”