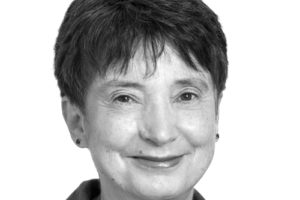 Epidemiologist and Komen Scholar Julie Palmer, ScD, MPH, has studied chronic disease in thousands of women since it was first recognized a quarter century ago that illness manifests itself differently between the sexes. Along the way, she recognized a significant and alarming difference in mortality for African American women diagnosed with breast cancer–40 percent were more likely to die from breast cancer than other ethnicities in the U.S.

Palmer is Karin Grunebaum Professor of Medicine at Boston University School of Medicine and Director of the Slone Epidemiology Center at Boston University. Dr. Palmer is also Associate Director for Population Sciences and Co-Director of the BU-BMC Cancer Center. Her research interests focus on racial disparities in the occurrence of hormone receptor negative breast cancer and in breast cancer mortality. Dr. Palmer is a founding leader of the Black Women’s Health Study (BWHS), a prospective cohort study of 59,000 African American women who have been followed since 1995.

Armed with the data collected from her study and that of others, Palmer, who has been a Komen Scholar since 2018, set out to find out why this breast cancer disparity exists.

“If I can do something to help high risk women get earlier detection and treatment to avoid dying, that’s what is important to me,” Palmer says in describing her passion for her work. She and her team are working on a risk predictive model right now, and expects to have results early next year. “What we learn could give primary care providers a tool that will help them determine which African American women should obtain a mammogram sooner than the recommended guidelines, and which women should get an MRI instead of a mammogram.”

According to Komen statistics, many African American women who die from breast cancer are diagnosed at a later stage of the disease, and by that time the cancer can be metastatic, treatment can be more difficult and unfortunately, treatment may not be successful. African American women are also more likely to develop more difficult types of cancer, such as triple negative breast cancer. The DFW area has the third-highest breast cancer mortality rate nationally for this population.

While Palmer finds her work fulfilling in the long-term connections it has created with study subjects, she says her greatest frustration is in the length of time it takes to apply for and receive critically-needed government funding. “The last 10 years has been very difficult for scientists, because we spend too much time in the process of trying to obtain funding than in doing the research that could save lives,” she says. “Also, the best and most innovative research ideas are the ones that are hard to get funded, because they are considered high-risk.”

That’s where Komen comes in.

“The Komen Foundation makes a huge impact, because it does exactly what’s needed,” she says. “We can focus on research, not grant applications. Komen is also one of the few to fund the high-risk research that makes a difference.”

Palmer says being part of the Komen Scholars group is critical to her work.

“The Komen Scholars is such an exciting group because the science has advanced so quickly over the past five years, and we can talk and work together as a team. Whether it’s at the biologic level of the mechanisms and traits of tumors, the discoveries about the immune system, or the genetic susceptibilities of breast cancer, we are really putting the pieces together for better treatments and cures. We will never stop all people from developing breast cancer, but we want to find it earlier and treat it without such toxic approaches.”

Palmer said there are two pieces of advice she would give African American women from her perspective as a long-time advocate for their health. “To African American women 40 years and older, you should consider getting a mammogram as a baseline. You can get it covered through insurance now, and if you don’t have insurance, mammograms are available for free from Komen-funded local health providers. After the first one, it may not be necessary to go every year. Yes, they can be uncomfortable, but delaying screening and treatment is far worse.”

Secondly, for women who have been diagnosed, Palmer suggests seeking a treatment facility that provides patient navigators. “Having someone to walk with you through the process, to explain the options and the choices that need to be made is invaluable, especially in the recent advances made in treatment of triple negative breast cancer.”

Palmer says she is a “huge fan” of the Komen Foundation and grateful for the funding support and in getting to know the other Komen programs and Scholars. “Komen’s priorities are in the right place,” she concluded.