You are here: Home » Funding Grantees Where Needed Most: One Woman’s Survivor Journey

Funding Grantees Where Needed Most: One Woman’s Survivor Journey 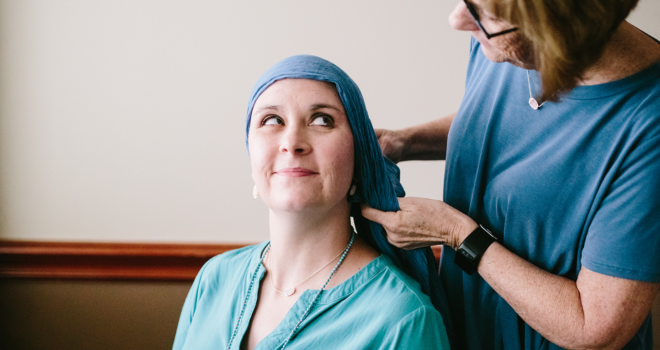 It was like any other evening when Joanna noticed the tender knot in her breast.

She felt the small lump as she was breastfeeding her baby girl. She dismissed it as a clogged milk duct knowing mastitis can occur during the first few months of breastfeeding. When she called the clinic the next morning, the nurse asked if she had fever or if the area was inflamed. It wasn’t inflamed and she didn’t have fever but it was sore, so they suggested she come in. The doctor didn’t think it was mastitis, but what she said next was devastating. She wanted Joanna to get a biopsy.

Two weeks later she got the test results, and the lump was malignant.

Everything after that was a blur. Could she still breastfeed? How would they pay for treatment? She was a stay-at-home mom and her husband’s income was already stretched thin. Would she need surgery, radiation, chemo? So many questions. Knowing her situation, her doctor suggested the JPS Health Network. She said they helped women like her receive breast cancer care. What would she do with the baby? They didn’t have family nearby and they were too new in their community to ask anyone to babysit. Her husband reassured her. He reminded her to face one thing at a time. The first step was to call JPS. When she did, they were so kind.

They told her not to worry and scheduled her an appointment with an oncologist.

She felt better after talking to the doctor. The doctor said it wouldn’t be easy. Facing cancer never is, but her odds were good since they caught it early. The doctor believed surgically removing the lump followed by chemotherapy would take care of it. Then she scheduled her an appointment with a JPS breast surgeon – but she was afraid to keep her appointment. The thought of how much surgery would cost, never mind the following chemo, was nauseating.

They were already struggling to make ends meet.

How were they going to pay for this? Keeping up with the payment plan for the hospital bills from the baby’s delivery was already difficult. Plus, her husband would have to take off work. That would leave them with even less income. She told her surgeon about her fears. She expected to hear they couldn’t continue if she couldn’t pay her medical bills, but she was wrong. Her surgeon encouraged her to move forward.

Susan G. Komen Greater Fort Worth granted JPS funding to help women like her, women who were diagnosed with breast cancer but couldn’t afford the deposits and co-pays for treatment. The relief and gratitude were overwhelming.

She could continue her chemo worry free.

Recovery from surgery was difficult, both physically and emotionally.

Joanna couldn’t lift or hold the baby. She couldn’t shower without help. She was exhausted and grieving. She had always wanted to breastfeed, and now she couldn’t. On the bright side, the baby was taking formula ok and her husband found a sweet older woman from a church in town who offered to help them free of charge. Her name was Arlene. Between Arlene’s gracious help at home and the financial assistance they received from JPS, she could rest much easier now. She still couldn’t believe that through a grant, Susan G. Komen Greater Fort Worth helped with her treatment bills.

The relief alone from their gripping financial fears had given her more energy to endure the side effects. She was determined to do everything she could to win her battle against cancer. She would not let her daughter grow up without a mother. Knowing she could continue her care brought tears to her eyes every time.

*The details of this patient story and name has been modified to protect the patient.