You are here: Home » Dawna Stankus Lives Life to its Fullest 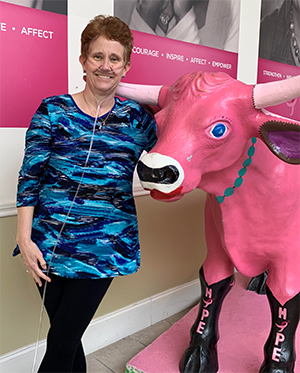 Dawna’s presence can’t be overlooked as her positive outlook on life quickly fills the room. “My total mission in this world is to give others hope”, she said.

In Oct 1999, Dawna was diagnosed with Stage IV metastatic breast cancer which was triple negative and had metastasized to her liver, lung, and bones. At that time her oncologist gave her 18 months to live…but Dawna admits that her 8-year-old daughter Katy and 10-year-old son Ryan gave her reason to live. She was determined to stay in the fight even after her husband was diagnosed with pancreatic cancer only days after her diagnosis.

Dawna was determined to fight and fought for both herself and her husband as she took on the role of caregiver for her husband and survivor for herself. She would eventually go through rounds of chemotherapy and radiation only to lose her husband 8 months after his diagnosis.

After losing her husband, she was determined not to leave her children alone and she resolved to fight even harder. During her 20 year fight, Dawna’s proudest moments included being able to see both her son and daughter graduate high school and college and the birth of her first grandchild, a granddaughter named Blakely.

Being a cardiac nurse at the time of diagnosis she immediately said the hardest decision she was faced with wasn’t whether to do chemotherapy or radiation but whether to quit the job she loved so much. She attributes her favorite cardiologist with keeping her in the workforce…”I started working as a breast cancer specialist at Texas Oncology and no one even knew I was sick until they looked up and I was bald. It was then that I forced to tell them about my breast cancer battle,” she explained. “I continued to work until 2011 when my lungs forced me to quit,” Dawna continued.

Even while battling metastatic breast cancer, Dawna managed to do every Race For the Cure and MORE THAN PINK Walk since 2009, when she first moved to Fort Worth from Michigan.  She even worked the medical tent at numerous Dallas 3 Day Walks until she had no choice but stop.

When asked why it’s so important to do the Walk and support Susan G. Komen, she simply said, “To give others hope! To remind them to put one foot in front of the other and to just keep fighting!”

If having a mantra helps with survivorship, then Dawna’s survivorship is definitely helped by her mantra of — “live life to the fullest every day, no one knows if you’ll make it home tonight but my God is bigger than any death sentence.”